I've now watched all the TV shows, and I'm aware that the TV show strays away from the books, but I have a question about Benjen Stark. In the TV series he appears every now and then to save members of the Stark family from the lands above the Wall. But it seems that it is never addressed Why he is there and how it is that he can't seem to escape from that place.

Is there any official story behind his life in the North? I plan to read the books very soon.
R

I read all the books. Benjen joined the Watch after Robert became king. He disappeared when going on a search beyond the wall for one of the leaders of the Watch and never reappears in the books. All of his post-season 1 appearances are purely TV show plotlines, since the last written book ended before Daensys returned to Westeros.

Thanks! That makes some sense, especially that he only showed up when someone needed rescuing - Really bad script writing. I'm hoping to start reading the books soon.

There are worse ways to perform deus ex machinas out there.

And the books are good, but there's quite a lot more squick in them, albeit in a way that, sadly, is historically accurate. Dany, for example, is 13 in the books when she is wed to Drogo. The sad thing is, Margaret Beaufort was about that age when she gave birth to the future Henry VII.

While we're on the subject, I might as well do what I do best, and derail this thread. Well, with an interesting tangent. I've been playing a game called Elden Ring, which is by the same developer as Dark Souls and Bloodborne. And as some of you might know, probably from my incessant posting about that game, the worldbuilding for Elden Ring was done by George RR Martin.

What's more, the voice cast for that game (being mostly British) actually includes a number of cast members from Game of Thrones. Sadly, speculation that Maisie Williams played either Melina or Ranni (the characters she was speculated to have played in trailers) proved unfounded, but Gemma Whelan, Ramon Tikaram, and Martha Mckintosh (who admittedly was only in the Telltale Games game) are amongst those who appeared in both Elden Ring and Game of Thrones.

When I think about it, Godrick the Grafted is basically what happens when you give Viserys Targaryen Igor-like abilities to graft new parts to himself. Scary thought when you realise he can fuse a dragon's head to his arm and use it as a flamethrower...

A different Game of Thrones. 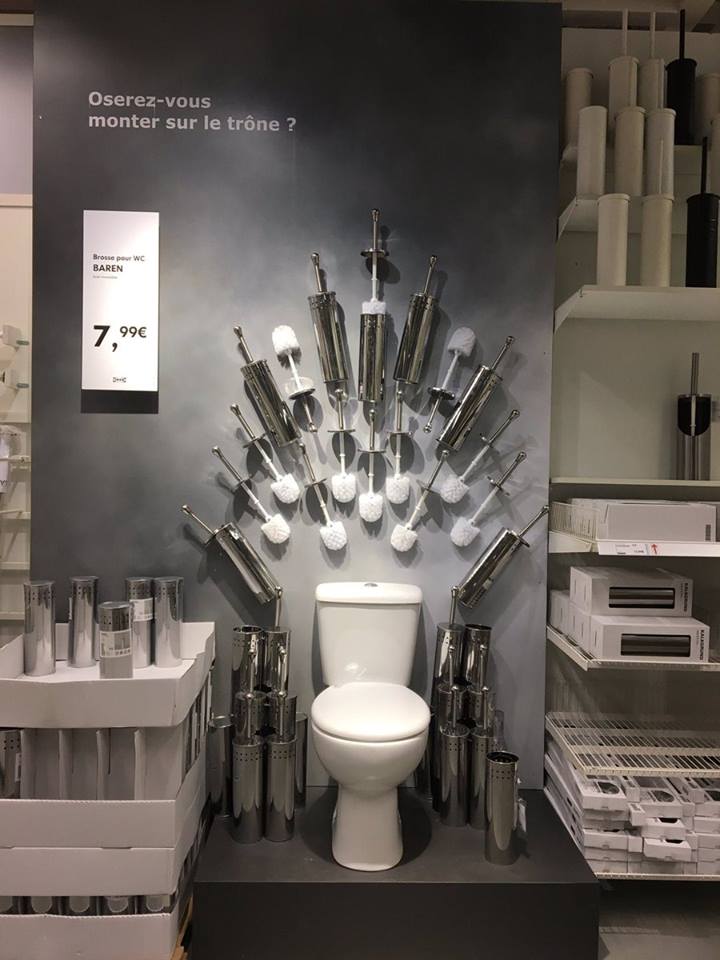 It's from IKEA in France. Here is the story about it from TIME Magazine.
R

Tonyblack said:
Thanks! That makes some sense, especially that he only showed up when someone needed rescuing - Really bad script writing. I'm hoping to start reading the books soon.
Click to expand...
Getting back ON the original thread, the first two books are very good, and the third book is the best of the series (mainly because it's where the now very well known "big events" occur). The fourth book is absolutely abysmal. The fifth and last book is a mixed bag. I think the TV showrunners made the right decisions in trimming the fat out of the last book for the series.

Last book to date (assuming Martin doesn't die before releasing The Winds of Winter, let alone A Dream of Spring), but I will agree with you there, raisindot, that the third book is one of the best, if not THE best, because of, as you say, the well-known big events happening.

Also, Tonyblack, may I make a suggestion? There are a couple of books that make a good primer to the backstory of the franchise, specifically The World of Ice and Fire, and Fire and Blood. The former is basically the history and geography of Planetos, with a lot of stuff that isn't in the books AFAIK, while the latter is basically an expanded look at the history of the Targaryen dynasty up until just after the Dance of the Dragons. I'm sure some fan of the franchise will take me to task for not mentioning the adventures of Dunk and Egg (aka Ser Duncan the Tall, and the King he later served, Aegon V), but I haven't read the novellas yet.

It's worth pointing out that the Dance of the Dragons is going to be the subject of the upcoming show House of the Dragon. Here's the new trailer, in case you guys are interested.


Basically, the Dance of the Dragons was the equivalent of the Anarchy in English history. Only, dragons got involved. Actually, this event decimated the dragons of the Targaryens, and they died out not long afterwards. While the Targaryens retained power for a long time, as Littlefinger points out in one of the Histories and Lore videos on the Blu-Rays of Game of Thrones, the Targaryens were just as avaricious and violent as any other lords, but they kept the peace simply because they had dragons to answer any complaints. And that although their line lingered for about a century after the dragons died, they wasted their time trying to regain that advantage. Witness how Aegon V died.

Tonyblack said:
Thanks Quatermass.
Click to expand...
You're very welcome. Those books give you some much needed background to the franchise as a whole, and they're enjoyable to boot...though some of the stuff is squicky (Targaryen incest aside, obviously). Then again, George RR Martin loves to push boundaries at times...

I found this amusing ... 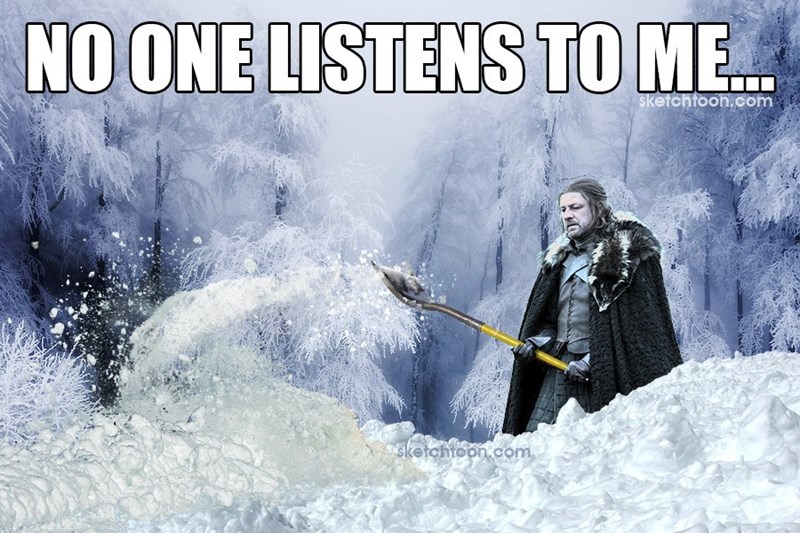 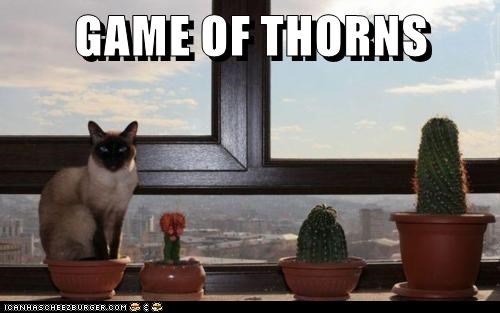 Oh, one more. Since the Senior Witches on Discworld bicker all the time, would that be a Game of Crones?

The correct collective noun for witches is a cackle. No, really.

But if you want some more good old Game of Thrones p***-taking...and to see Joffrey, or at least a blatant expy, get slapped a dozen times...well, this is the video for you. This comes from the Tiny Tina's Assault on Dragon Keep DLC from Borderlands 2, specifically the sidequest 'Winter is a Bloody Business'.


As you can imagine, I LOVE this sidequest.

Speaking of which ... this isn't to do with Game of Thrones, but works a lot better if you're familiar with Skyrim. (So, to a person who doesn't care about games, it's pretty much the same - it's all just fantasy, innit?)

HOWEVER ... in the game "The Elder Scrolls V: Skyrim", you play a character known as The Dragonborn, a mystical hero who can kill dragons and steal their power. Dragon Power is manifested through Dragon Shouts, which are expressed through ancient Words of Power. Every Shout is made up of three Words of Power, and the first Shout you learn is Unrelenting Force, which is expressed as FUS RO DAH! (literally "Force Balance Push!"). This fires a shock-wave of force energy that stuns and pushes enemies, and can even throw them backwards into the wall or off a cliff.

Anyway ... here's my take on this whole thing. Just for fun

Top Ten Dragon Shouts that were Rejected by the makers of "The Elder Scrolls V: Skyrim"

9. FUS RO MOOOOM!! - The Dragonborn's mum appears. In a bad mood. 'Cos you picked on her little boy

8. FUS RO DUMB - What to say to someone who persists in making stupid arguments with you

7. FUS RO LA-LA-LA - The Dragonborn becomes a bard and blows away all the critics

6. FUS RO OOH, TA - The Dragonborn accepts a cup of tea from a bad waiter, then blows the waiter away

5. FUS RO BAH, HUMBUG - How "A Christmas Carol" should have ended

3. FUS RO ДВА - The Dragonborn blows away two opponents at once

2. FUS RO TROIS - The Dragonborn blows away THREE opponents at once! (Trois is pronounced "twa", French for "three")

You're just begging for Alduin to come and eat you, aren't you? Zu'u koraav nid nol dov do hi.