I don't think Facebook images in that format will display here - instead of it linking directly to the image it links to the facebook image-post which the board software struggles to display as it doesn't recognise it as a straight image.

I did a google reverse image search and found a version for you at:
http://www.planetxtoys.com/tetsujin-28-non-scale-plastic-model-kit-volks-gigantor/ 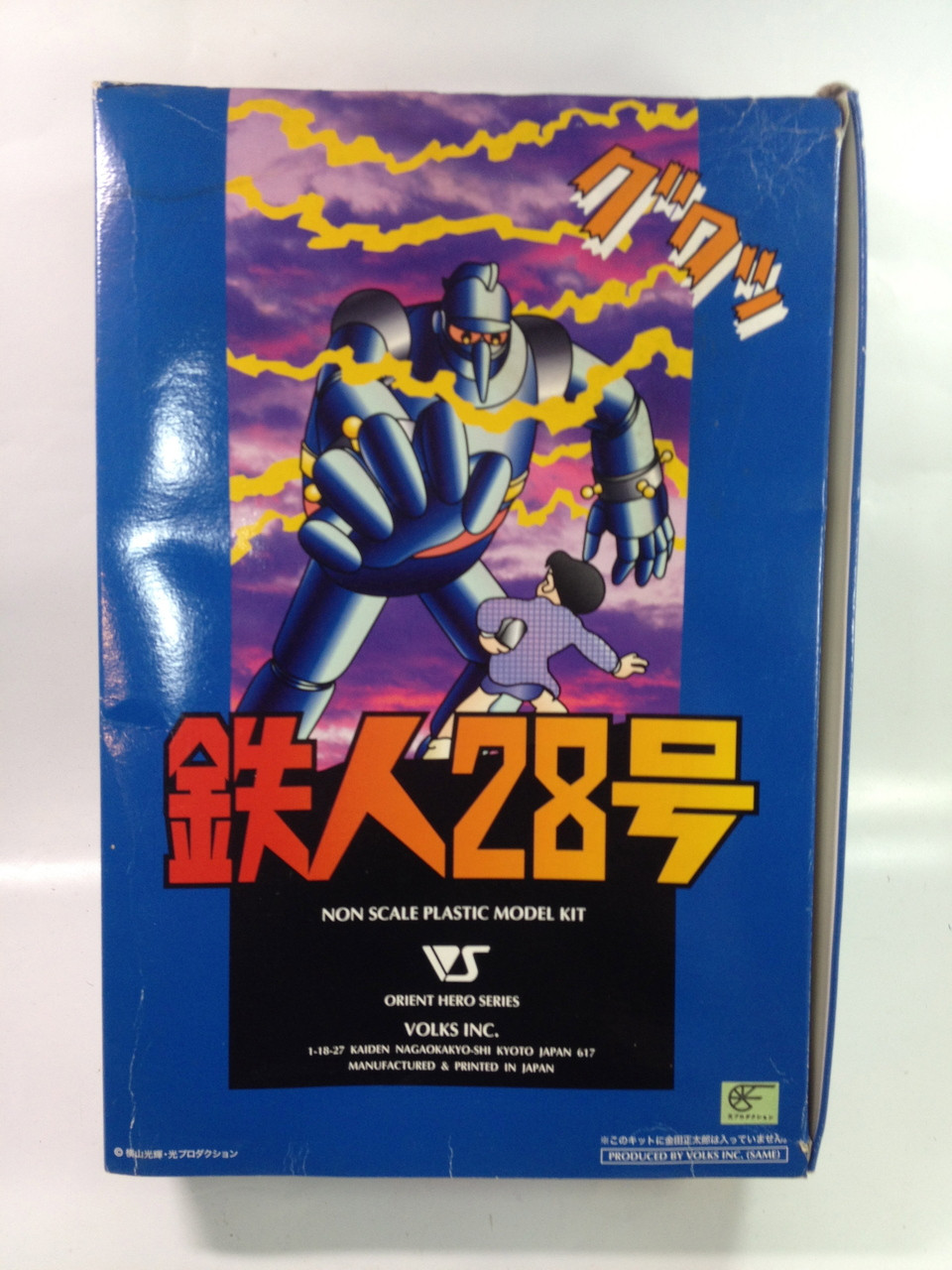 Wow, Gigantor. That is seriously old school stuff right there.

Actually, stupid question, but speaking of old school how many people can recommend the original Mobile Suit Gundam? I think I can get it from the library, but I'm not into mecha series in general, with Evangelion and Code Geass being my only real forays into the genre.

Thanks ThinkingFox! It used to work linking to Facebook and was useful after Photobucket decided to screw over everyone's links.

I don't think Mobile Suit Gundam was ever shown in the UK, although we did get a lot of old school Japanese series such as Marine Boy . . . and a bunch of others that I'm drawing a complete blank at, at the moment.

Tonyblack said:
Thanks ThinkingFox! It used to work linking to Facebook and was useful after Photobucket decided to screw over everyone's links.

I don't think Mobile Suit Gundam was ever shown in the UK, although we did get a lot of old school Japanese series such as Marine Boy . . . and a bunch of others that I'm drawing a complete blank at, at the moment.
Click to expand...
Never heard of that one.

I'm sort of splitting my time amongst various series anyway. I'm trying to finish at least the first season of Code Geass: Lelouch of the Rebellion (and I'm considering going for the spinoff interquel series Akito the Exiled), watching My Hero Academia, Persona 4: The Animation, GATE: Thus the JSDF Fought There, JoJo's Bizarre Adventure...yeah.

Shouldn't this be in the Other TV, Film and Theatre forum?

Also, just finished watching the two seasons of Tokyo Ghoul. The first season was good enough, but the second season, while great in many areas, buggered up Ken's story arc. A shame. The manga is superior in many regards...

I've now started watching this messed-up series called Future Diary. Like the Fate series, it's a dark fantasy series revolving around a lethal tournament with a prize of ultimate power up for grabs. However, this series is even more messed up. Anyway, here's the opening titles with an English cover of the song. Warning: disturbing imagery ahoy!

Notice: this review will contain a few spoilers. I'll mark them but if you haven't watched this yet, proceed with caution. Sorry about that.

Survival games have always been one of my favorite kinds of stories. I just love them. So naturally, when I heard about Mirai Nikki's premise, I was greatly looking forward to it. Unfortunately, after an excellent first episode, this series began to get worse and worse; by the end of it all, it had become nothing but a huge disappointment.

Let's begin with the positive aspects of this show. The art and animation in Mirai Nikki are, for the most part, rather good, but nothing very impressive. As for character designs, it's pretty hit-and-miss. Some characters look OK, while others are so ridiculous it makes the anime seem/feel less serious than it should be, which is NOT a good thing for a thriller/mystery.

The music is great. Most of the tracks are somewhat memorable and fit their scenes well. The OPs and EDs are also very nice, with the first OP being particularly awesome. I never skipped them. Voice acting-wise, everyone does a solid, consistent job, except for Yuno's seiyuu. I'm sorry, but her voice was annoying and hearing that infamous "Yukki!" every god damn minute was painful.

Now let's get to the bad stuff. While the premise is amazing, the story & script are very poorly written. Thing is, Mirai Nikki is a shounen trying (and failing) to be a seinen; thus, it lacks the maturity and depth needed to handle the kind of story it offers. Many questions are left unanswered, some of the writing choices are just plain stupid, half of the characters have a very low IQ and, for a mystery, there aren't that many twists, and those the anime DOES have are often predictable.

The whole concept of using Future Diaries to outsmart opponents in deadly, tense battles is BARELY explored, plus the battles themselves seldom involve complexity. When you've got tools as powerful as those, you'd think there'd be gambits just piling up on each other, but no. Many battles are over within a minute and are so basic it's insulting. Speaking of insulting, this show has a nasty tendency to have its world just forget about some of the big events related to the diary holders. Normally the media would be all over a series of bombings, massacres, etc... but here? Nah, it's just Tuesday again. It's astonishing how everyone can easily get away from anything.

Another problem with this anime is its bad habit of throwing in bits of humour in the middle of serious moments. It really kills the atmosphere and it's not funny. Even in the more lighthearted scenes, it's not funny. Since we're talking about the atmosphere, have I mentioned that some details in crucial moments are overlooked, which obliterates the immersion? Empty hospitals, incompetent cops, silent bystanders...it's the little things that can make or break the mood. A shame, really, because the anime IS able to create a good, creepy atmosphere at times (ex.: the end of episode 3).

Remember what I said about there being a lot of predictable twists? I kinda lied. The biggest twist in the whole story, which unfolds in the last few episodes, took me by surprise. Did it make sense? Well, yes, at least until the anime began to blatantly make shit up on the spot. Did it answer a few questions? For sure. Did it raise even more questions - most of which remain unanswered - and present to us an INCREDIBLY STUPID twist later? OH YES.
T

Sheesh. got into the older listings and necroposted. But it's still true: The movie of Howl's Moving Castle isn't bad, but is very different from the book. I spent a long time going over the book (and its two following books-in-the-same-universe) a year or so ago and would love a discussion. Maybe here, if it's book-vs-anime, maybe in books-by-others if just the book. 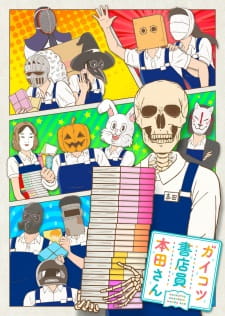 Based on the real life of Honda-san and his experience as a bookseller
with his equally eccentric coworkers, Honda constantly deals with the stressful requirements of the bookselling industry. From the drama of receiving new titles without their bonus material to the struggle of providing quality service to customers who speak a different language, the work of a skeleton bookseller never ends.

I really recommend watching this anime it's funny without being obnoxious, grounded without being overly
dry and dramatic and with each episode being about 11 mins long it won't overstay it's welcome.

Ghost, I understand that Future Diary is very much a case of YMMV. I am yet to come back to the series because I'm not sure I can handle the dark onslaught to come yet, though I may soon. I've also recently purchased The Saga of Tanya the Evil, and if it's anything like the first book, which I've read, I'm looking forward to it. I'm personally impatient for more Nasuverse stuff. I'm wondering, for example, when Fate/Extra: Last Encore and The Lord El-Melloi II Case Files will be coming out on DVD. To say nothing of the upcoming Fate/Grand Order anime adaptations of the Camelot chapter (which I recently finished in the game: God, the story is good, given that it was actually written by Kinoku Nasu himself, but the gameplay is very unforgiving) and the Babylonia chapter.

although it feels a stretched it doesn't disappoint and ticks all the boxes of a regular
episode of being relaxing, funny and a little sad
also, look what happened to Nyanko Sensei that is cute AF

I've heard of that series. Not my cuppa, though. Also, isn't Nyanko-sensei, despite looking like a cat, some sort of weird youkai dog or something?

Actually, one new series I'm considering watching is Mob Psycho 100, a very trippy series (by the sameguy behind One-Punch Man) about psychics, specifically about a psychic teenager called Shigeo Kageyama, aka 'Mob', who is one of the most powerful psychics in existence, but wants to lead a normal existence. He suppresses his emotions to suppress his powers, but when his emotions reach a level of 100%, he explodes with power, and he ends up getting drawn into helping a false psychic (albeit a well-meaning one) called Reigan. If you have any idea of what One-Punch Man is like, then you'll know to expect trippiness and humour, though you could tell the former from these opening titles...

yeah, I used to prefer Mob over One punch.
Both of them, a love letter to and satirical swipe at their particular genres.
And now I enjoy them both equally.

That's a very good way to look at it. The best satires of genres are created by those who love them. Hell, the Abridged Series are a case in point.