Dont stone me, similarities between the Potter universe and Diskworld

Yea, I know, Harry Potter was a bit too famous, but it is the kind of story that has a mix of wit and drama. There were moments at HP when I burst with laughter and moments when I weeped at a Pratchett.
And, does Ponder Stibbons do not look like a nerdy bro of HarryP.?!

I always thought, that Granny Weatherwax is very similar to Prof. Mc Gonnagal. If there was a movie about Pratchetts witches, I could imagine Maggie Smith as Granny and Miriam Margolyes as Nanny

I could imagine Susan Sto Helit become teacher of defending dark arts
So, what do you think?
R

I don't think Pterry had much of an influence on Rawling or vice versa. I mean, many of the characters in both series follow similar fantasy and fairy tale cliches. Witches are is often stick thin, bony, with a sharp expression and demeanor. Wizards are often big men with long gray beards. Unseen University is the opposite of Hogwarts--a sexist, male-only establishment of anti-learning. And I don't think anyone really knows what Ponder Stibbons looked like (were his physical features ever described in detail?). One might make a very shaky argument that Pterry was influenced by Rawling when he created Tiffany Aching, since, like Harry Potter, she is kind of an outcast who doesn't always understand the powers she possesses, only to fully find what she's capable of when she's facing and overcoming a larger-than-life foe. But there really aren't too many ways to vary from the fantasy formula. I think Pterry is both the better writer and the DW series is a more impressive achievement, since his style evolved over the years from basic fantasy satire to truly profound works that combined world-building with mind-bending philosophy.

As raisindot says, both Terry and JK Rowling were influenced by myths, legends and other fantasy tales more than they were by each other. Both take the archetypical visuals of character types but develop the characters behind them in different ways.

I completely agree that Maggie Smith and Miriam Margolyes would make a great Granny and Nanny - but who knows if we'll ever see a Witches film made. If The Wee Free Men film ever gets off the ground, perhaps we'll see those characters cameo in it (they're in the book, near the end), but who knows what the casting will be like at that point.

There are many people who've done comparisons between Discworld and Harry Potter - some even academically - so finding similarities is perfectly normal. Just realise that the authors didn't really influence each other, they're just both drawing on older stories lost in the mists of time (or, in the case of "The Worst Witch", the 20th Century)

Thank you Molokov, I should have added before, that I have the similarities from the book covers, eg. Darwin's Watch and Unseen Academicals. And of course, I never thought, anyone would have stolen anything. Similar like https://discworld.fandom.com/wiki/Ponder_Stibbons describes it.

It's a shame when an artist's rendition of a character over-influences the reader's imagination. The old Josh Kirby covers were so cartoony that this wasn't a problem. When we have had discussions about actors to play parts in an imaginary film, the Paul Kidby renditions have always been a major influence.

Yes. IIRC, in the old (first) Discworld encyclopedia, Terry mentions this similarity, and notes that at least one HP fan asked him in conventions about the similarity between Hogwarts and UU, between Harry and Ponder, and so on. He further notes that there is at least one HP fan who angrily accused him of ripping off Rawling, to which Terry noted that he'd been writing the Discworld books since at least 1980-81.

At this, the HP fan got very red in the face and said, "O-ho, so you're saying that Rawling ripped you off, do you?!"

To which the only possible answer, as Terry says, is to sigh and explain that no, wizards and magical universities are staples of fantasy. They are generic. That's why it's called a genre, for heaven's sake.

Question? Is there any mention, in any of the books, that Ponder wears glasses?

Not to the best of my knowledge. The only places we see them are in the illustrations from TLH.
T

Another possible influence might be that "glasses on the studious outsider boy" is standard since the 19th century. It's used in the Narnia books, it's used in Neil Gaiman's Books of Magic series (the bespectacled boy wizard in that one also has dark hair and a pet owl), it's a fantasy standard.

Ohhhhh, interesting subject. Well, I think Rowling was "inspired by" many books, myths, folklore etc, and mixed everything together.

I do think there are many similarities between HP and Discworld. To begin with, Hogwarts is a school of wizardry that has a spell of invisibility and "can't be seen" (ehem). The Unseen University is indeed a male-only establishment, but at the end of Equal Rites...

...the archchancellor decides to allow more girls to study there as a trial (what a shame that didn't work!) and actually asks Granny to became a teacher.
And... speaking of Equal Rites:

When Esk spends too much time inside the mind of an eagle, Granny has a rough time trying to untangle the thoughts of the girl, which are thin silver threads... And in Harry Potter the memories contained in the Pensieve have the appearance of silver threads.

Aw, that silver threads. Maybe it is something very magical inspiring writers. I just remember a german writer and cartoonist who is also a fave parallel universe maker of mine: Walter Moers, in his novel Rumo the title person feels a silver thread to the meant to be partner!
Even myself as a hobby writer and cartoonist feel a bit robbed when I read about those Fantastic Beasts, the name of that cat like creature sounds so similar to a town I invented as a child! At least in the german translation. So how did my Knieselhof got its name? Had no thoughts about that then but today I have to turn it into a fanfic saying a kitty named Kniesel saved a cottage from flooding...

How does a kitty save a cottage from flooding? *curious*

I have an idea for a full-blown book, starring a very big kitty ... 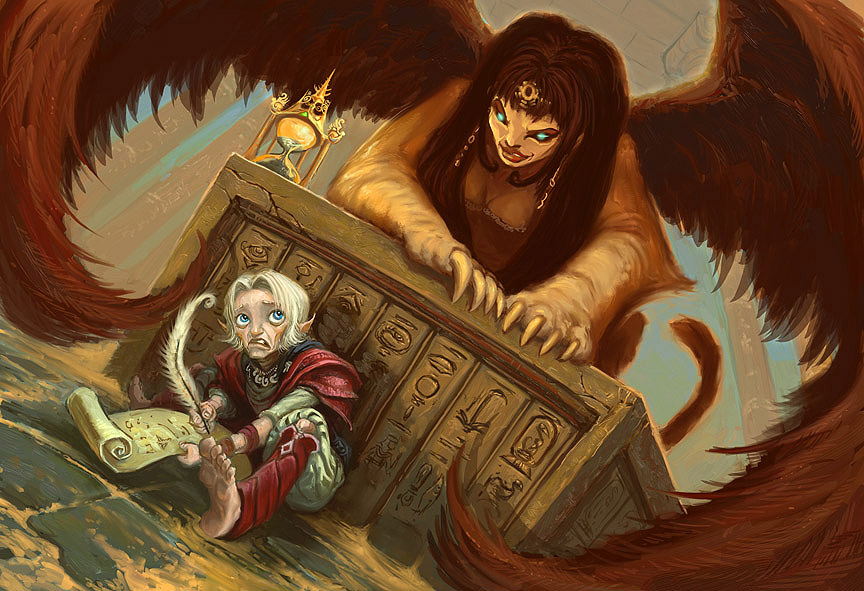 (Don't be afraid! I'm writing about the last Sphinx, the Sphinx of Thebes, and what happens to her after Oedipus solves her riddle).

RathDarkblade said:
How does a kitty save a cottage from flooding? *curious*
Click to expand...
Short version evil doggish build a dam. kitty alarms the watercats and they destroy the dam and the evil doggish gets its own weapon against themselfs. Even have a soundtrack in mind. Dirge by Death in Vegas.