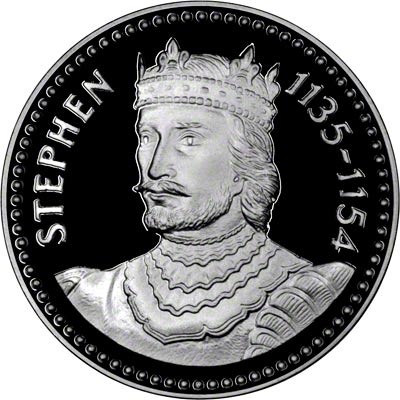 This isn't a real coin from the reign of Stephen of Blois, is it? I'm pretty sure that during The Troubles - the name given to the Civil War between Stephen and Matilda - neither one had actually been crowned, as such. I suppose the English have always been too sensible to have a King Steve.

So where is this coin from? And is there one for Matilda too - or Queen Matilda, as it were? Just wondering!

I'm sure there would probably be coins - original coins, that is - from the reigns of most other British kings and queens. There probably aren't very many from the time of the Protectorate, though... Charlie Two probably wasn't too happy about anything that would remind him of the bloke whose orders knocked off his daddy's head, even if Charlie One was an obstinate, useless old fool. But that''s just my opinion... what do you reckon?

I merely Googled "1135" and looked through the images for that number.

The coin seems to be from a commemorative set called Kings and Queens Collection, Silver Medallions.

Henry I (1100-35) nominated his daughter the Empress Matilda as heir to the throne, but after Henry's death his nephew Stephen seized the throne. A Scottish invading army was defeated in Yorkshire in 1138, but Stephen could not prevent the loss of the northern counties of England to the Scots in 1139. Stephen himself was captured at the Battle of Lincoln in 1141, and Matilda claimed the throne with the aid of her husband Geoffrey, count of Anjou. In the civil war or Anarchy that followed the country was divided between regions loyal to the king and the lands of Matilda and her supporters, many of whom issued their own coins. Order was restored in 1153, when Matilda's son Henry of Anjou (the future Henry II) was recognized as the heir to the throne, and there was a return to a unified national currency.
Click to expand...
The original source of the quote (above) and a link to photos of the various coins issued during that period, can be seen HERE.

Thanks for asking - I have to admit that it was a period in history that I was only vaguely aware of. So I enjoyed looking this up.

Maybe we could all use this thread to talk about various other items of history.

Why not? It'd be a nice diversion.

Whoops - I've read up about that period, but I forgot it was called "the Anarchy".

The Cadfael stories by Ellis Peters was set during this period. (They are not historical novels though).

True, Chucky - but she does try to get the correct feel for the period. And it's written with history going on in the background - so to speak. It's like some of Bernard Cornwell's books. There's a real event/war going on and the story he has written is happening with that event also happening. He usually goes that one step further and puts his protagonist actually into the historic event, at least for part of the book.
You must log in or register to reply here.
Share: Facebook Twitter Reddit WhatsApp Email Link